OUT OF THE PICTURE:
A Shepherd Sisters Mystery (Book One) 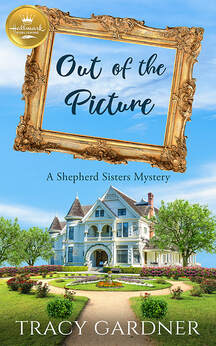 ​Savanna Shepherd, a former art authenticator, has a talent for spotting secrets hiding in plain sight. In the wake of a painful breakup, she moves back to her idyllic hometown on the banks of Lake Michigan. At least she's close to her sisters again, and she's enjoying her new job as a grade school art teacher.

Savanna even rediscovers her creative soul when an old family friend hires her to paint a mural. But sad and strange incidents occur at the woman's mansion, compelling Savanna to investigate. With a little help from Aidan, the intriguing town doctor, will she be able to figure out what's wrong with this picture?

BEHIND THE FRAME:
A Shepherd Sisters Mystery (Book Two) 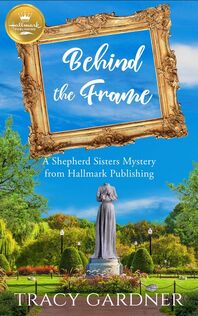 Savanna Shepherd, an art expert turned elementary art teacher, is planning the Art in the Park festival for her hometown of Carson. But apparently, someone isn’t happy that Carson got to host the event: the beloved statue in the park is destroyed. Not long after, Savanna finds the dead body of one of the people on the planning committee.

Savanna and her sisters are convinced that the arrested murder suspect didn’t do it, despite strong evidence to the contrary. With the help of Dr. Aidan Gallager, Savanna’s new romantic interest, they uncover hidden resentments and intrigue. Several people in Carson had a motive for the murder. Can they find out which one of them is behind the framing of an innocent person?

Savanna Shepherd, a former art authenticator turned grade school art teacher, is delighted when her Uncle Max and Uncle Freddie move to Carson. Uncle Max takes a job at Libby’s Blooms, where Savanna teaches a still life painting class for adults. But one morning, Uncle Max finds a dead body in the rooftop greenhouse…and even worse, it looks like an inside job.

Savanna and her sisters—Skylar, a lawyer, and Sydney, the owner of a pet shop and grooming salon—dig in to find the real murderer. With their connections to the community and Savanna’s keen eye for details, they uncover longstanding resentments and horticultural clues. Meanwhile, Savanna’s dating local doctor Aidan Gallager, but she worries it’ll cause a scandal, since his daughter is in her class. As Savanna’s investigation leads her into thorny situations, the killer may be arranging another murder: her own. 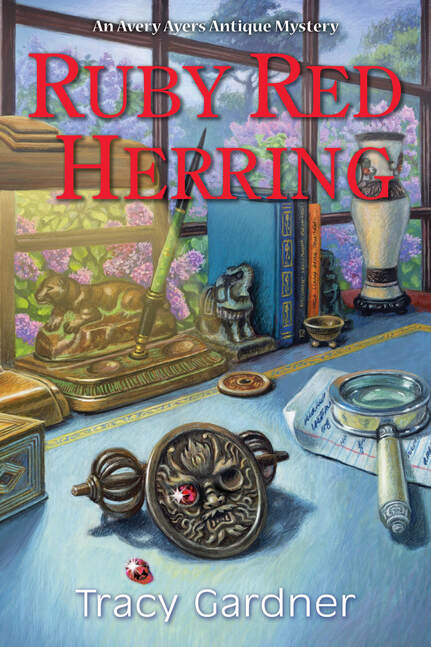 After her parents' deaths, Avery Ayers takes over the family business, Antiquities & Artifacts Appraised, from the home office in Lilac Grove and a branch in Manhattan. Now living back at home with her younger sister Tilly and their newly moved-in, eccentric Aunt Midge and her Afghan hound, Avery's life is filled with jewels, tapestries, paintings, and rare finds. But their world is rocked when Avery learns that the theft of a priceless ruby may be connected to her parents' demise.

The trouble starts when the Museum of Antiquities hires Avery to appraise a rare, resplendent ruby. It bears a striking similarity to a solitary stone in the museum's prized Xiang Dynasty bejeweled dragon medallion exhibit, which has long been missing one of its ruby eyes. Now, Avery and her colleagues--ostentatious Sir Robert Lane and fatherly Micah Abbott--suspect they may have the missing gem. But facets of the case remain cloudy. Security guard Art Smith is always underfoot but is not what he appears. Another body turns up connected to the appraisal. And Avery receives mysterious notes that begin to put her life in danger.

Avery enlists possible ally Art's help in cutting the list of suspects who might have polished off her parents and swiped the jewel. Was it art collector Oliver Renell? Curator Nate Brennan? Acquisitions Liaison Francesca Giolitti? Actor Tyler Chadwick? Was the crime impersonal or perpetrated by someone all too close to Avery? If she can't find the culprit, lovely Lilac Grove may be the setting for Avery's own death.

THE FALL OF OUR SECRETS

Laura and Nicole, childhood friends separated by mysterious circumstances, meet again quite by accident and renew their friendship. Laura is a devoted single mom. She’s stuck in a going nowhere relationship, but doesn’t realize it until she meets Adam, her newly dubbed Airport Hottie, on the flight home after spending a whirlwind weekend with Nicole. Nicole is now married to the man of her dreams, but she carries deep wounds from a childhood filled with secrets, constantly afraid to trust any true happiness she encounters.

Together these two best friends work toward uncovering the long buried secrets of Nicole's horrific past, ultimately freeing her to believe in and embrace the new life she’s worked so hard to create. The friendship nurtures both women and Laura finds her own self confidence and the revelation that what she needs is within reach, hers for the taking. THE FALL OF OUR SECRETS takes the reader on a hopeful journey of love and discovery.